Visit our gallery to find beautiful works by: 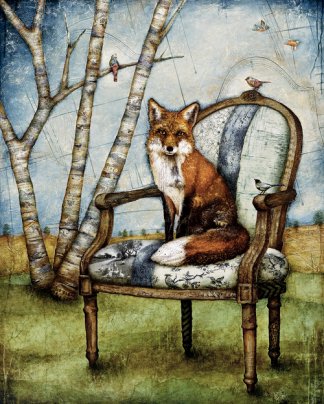 Michelle strives to create pieces that have a familiar narrative yet still convey a fresh look and allow for the unexpected. She uses acrylic paint, mixed media materials such as paper, hand made linoleum stamps, sewing patterns, maps, old letters, pages from books, and more.
Her current body of work is titled Of Land and Sky, Whimsical and Free. The work’s focus is centered in longstanding memories, fleeting ideas, and hope for the future. Beginning in 2014 Michelle began showing this body of work at juried art shows and festivals in the southeast.

Don Stewart received a Bachelor of Science degree in Biology and Art at Birmingham-Southern College in 1981, paying his way with a nightclub act as a comic ventriloquist. Initially he enrolled in art classes as a change of pace from a rigorous premedical curriculum. Soon, however, he was exposed to the idea of composite imagery, and began exploring techniques in ballpoint drawing – even when a professor refused to allow the pen in his studio.

Don continued to pursue artistic interests as a hobby during medical training at the University of Alabama at Birmingham. After receiving his M.D. in 1985, Dr. Stewart  completed an internship in surgery at the Mayo Clinic, but the lifestyle of a surgical resident clashed with his creative side. By year’s end, Don opted to discontinue his medical studies, after accepting awards for both short fiction and poetry, and publishing his first two composite drawings.

CHECK BACK SOON AS WE ARE IN THE PROCESS OF CREATING A FULL LIST OF CARRIED ARTISTS.

***Open Sunday and Monday by appointment only***